So, yesterday, the news was announcing that a full "Pink Moon" would be out.  Considering pink is my favorite color, and the fact that it was my 10th wedding anniversary, I felt this to be a VERY special moon.  So, our family decided to make an adventure out of finding a great spot to view this "pink moon" and of course I had intentions of trying to capture it.

We left while the sun was setting to give us me plenty of time to set up for a great view  shot.  We drove to a couple of the locations we had in mind, and no moon.  The boys wanted snacks, so we decided to drive to a local convenience store, and then there it was, Adan spotted what was to be the "Pink Moon"!

There is was, low to the ground, huge, beautiful, and yes, to me it looked to have a pinkish tone!!   We found a good spot, not as scenic as I had envisioned, but with a great view.   We had some technical difficulties with the tripod, so the top of the minivan had to do, and it did, as I was able to capture some decent images!

What we all noticed, however, as the sun set and the pink tone of the sky diminished, the pink tone of the moon also disappeared, and although beautiful, bright and full, it appeared to be a normal colored moon.  So being the curious type that I am, I decided to to a bit of research and found that The Native Americans named the full moons  based on their harvests at the time of their appearance. The "pink moon" would occur during the time the wild ground phlox would blossom (which is a plant that produces beautiful, bright pink flowers)  and that is how the "pink moon" got it's name. It is the first Full Moon of The Spring. 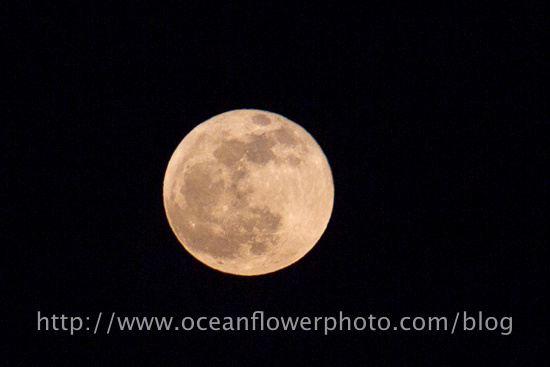